North Carolina’s New Voter Law Affects Minorities including Women Voters
Women in North Carolina are the majority of voters – 54%.  In the 2012 national election AAUW NC assisted the NC Women Matter Coalition of 29 Women’s Organizations to “get out the vote”, targeting women voters.  Two weeks ago the 2013 NC General Assembly in its last 72 hours pushed through and passed a 56-page bill- HB 589 – A Voter ID Law described in The Washington Post (8-15-13, see below) “as one of the nation’s most wide-ranging voter I.D. laws.”   Concern exists that this law actually disenfranchises voters, especially minority voters including women voters.

The Washington Post dated 8-15-13
North Carolina law takes war on voting rights to a new low
“The move (Voter ID Law) is likely to touch off a major court battle over voting rights, and the Justice Department is weighing a challenge to the new law, which is the first to pass since the U.S. Supreme Court struck down part of the Voting Rights Act.

The measure requires voters to present government-issued photo identification at the polls and shortens the early voting period from 17 to 10 days. It will also end pre-registration for 16- and 17-year-old voters who will be 18 on Election Day and eliminates same-day voter registration.

Democrats and minority groups have been fighting against the changes, arguing that they represent an effort to suppress the minority vote and the youth vote, along with reducing Democrats’ advantage in early voting. They point out that there is little documented evidence of voter fraud.

Republicans say that the efforts are necessary to combat such fraud and that shortening the window for early voting will save the state money. They also note that, while the North Carolina law makes many changes to how the state conducts its elections, most of its major proposals — specifically, Voter ID and ending same-day registration — bring it in line with many other states. More than three-fifths of states currently have some kind of Voter ID law, and even more have no same-day registration. Not all states allow in-person early voting.”

Bob Hall shared that HB 589 is more than a Voter ID law.  It is “reminiscent of Jim Crow laws in the 19th Century.  In the beginning of the 20th century North Carolina was in the bottom fifteen of the numbers of voters who voted compared to other states.  State lawmakers made changes in the year 2000 to enable voting to be more possible for more people.  In 2012 North Carolina became listed in the top half of states for voter turnout.  Such strategies as early voting and same day voter registration helped increase voter turnout.  This 2013 law closes down all these positive changes and is very disappointing.  The changes will have a disproportionate impact on minorities especially African Americans and potentially for women.

New Voter Law ID Requirement and Major Concerns
The most controversial part of the “Monster Law” as Bob calls it is the ID requirement which is the strictest in the nation and becomes effective in 2016.  In 2014 ID’s will be asked for and records kept of those without ID’s however they will be able to vote.  There will be NO student ID’s permitted.  One of the concerns is that a voter’s current residence address is not so important and what will be the reasonable match between the voter’s address of voter registration and current residence address.  A process for voters to obtain a Free ID is created in the law however this process is not available until Jan. 2014 so until then voters who desire a free ID for 2013 elections will still have to pay to obtain a voter id.  Another concern is that a current ID is good from age 70 +.  However a 65 year old who has an ID must renew his/her ID until age 70 which might be problematic for Seniors, especially medically challenged Seniors.  Women may not have a valid ID if they have married and changed names and not updated their ID prior to voting.  A marriage license is needed to obtain the new ID which may not be easily accessible.  Also, some North Carolinian’s who had births at home may not have birth certificates which will negatively impact many of our elderly rural population.  Ironically Curbside voting for seniors or disabled voters requires no ID yet a utility bill or bank statement will be required to vote which seniors will need to know.

Other Provisions under the New Voter Law
Early Voting now will be just ten days.  People who are the most eager to vote usually use early voting.  20% of African American female Democrats used early voting in the past election.

No Same Day Voting (Registration) exists now with this new law.   In the past election (2012) 34% of African Americans used same day voting.

No Straight Party Voting which is quite an impact because this has been on the ballot since 1925.

No Out of Precinct Voting which may impact those who are mobile and recently move and go to the wrong precinct.

Mail-In Absentee Voting which Bob feels “is where the most fraud goes” now enable groups to mass mail forms to their favorite voters already filled out for them to insert their identity information.

For a Summary Handout of the new Voter Law – Use the following link:
Monster Law: More Money, Less Voting
http://www.democracy-nc.org/downloads/MonsterLaw-IDAug2013.pdf

Find Listen to the Call Instructions at http://ncwomenmatter.org/ to Hear the 8-16-13 call to understand:

Additional Recommended Readings on the New Voting Law:
North Carolina law takes war on voting rights to a new low dated 8-15-13
IN THE wake of the Supreme Court’s Shelby v. Holder decision, which gutted significant portions of the Voting Rights Act, it’s difficult to say which of the many recently passed voter-suppression bills constitutes the greatest threat to that most sacred of American freedoms: the right to vote. The contest has several leading contenders, but the winner just might be North Carolina’s especially draconian bill, signed into law on Monday.
Read more: http://www.washingtonpost.com/opinions/north-carolina-law-takes-war-on-voting-rights-to-a-new-low/2013/08/15/5b25a88c-0452-11e3-a07f-49ddc7417125_story.html

Editorial – Two election boards provide ammunition for opponents of new voting law dated 8-15-13
In North Carolina, the political makeup of three-member county election boards is determined by the governor’s party. McCrory is a Republican, so each has two Republicans and one Democrat. In each of these cases, the Democratic board member dissented.

Expect more such challenges. The chairman of the Pasquotank board, Pete Gilbert, told the Associated Press he’ll “take this show on the road” to encourage other county boards to get busy challenging college student registrations.
Read more: http://www.starnewsonline.com/article/20130815/ARTICLES/130819760/1108/editorial?p=2&tc=pg

Let the Voter Clampdown Begin dated 8-15-13
That didn’t take long. Hours after Gov. Pat McCrory signed legislation overhauling North Carolina’s voting laws, local election boards started making changes that will make it harder for college students to participate in elections.
The Watauga County Board of Elections on Monday voted 2-1 — two Republicans against one Democrat — to shut down an early voting site and an Election Day precinct on the Appalachian State University campus. They also cut the number of early voting sites overall from three to one, and combined three Election Day precincts into one. That will put 9,300 Boone residents in one precinct, though the Watauga Elections Director Jane Ann Hodges said state guidelines call for a maximum of 1,500 voters in any one precinct.
Read more: http://obsdailyviews.blogspot.com/2013/08/let-voter-clampdown-begin.html#storylink=cpy

Hagan demands review of NC voter law dated 8-13-13
Sen. Kay Hagan (D-N.C.) on Tuesday called on the Justice Department to review her state’s new voter identification law, calling it one of “the most restrictive in the country.”
North Carolina Gov. Pat McCrory (R) signed into law a bill on Monday that would require voters to show government identification when voting, shorten early-voting days, cut off same-day registration and end a program to preregister teens who would be eligible to vote by Election Day.
“I am deeply concerned that H.B. 589 will restrict the ability of minorities, seniors, students, the disabled, and low and middle incomes citizens to exercise their constitutional right to vote,” Hagan said in a letter to Attorney General Eric Holder.
Read more: http://thehill.com/blogs/blog-briefing-room/news/316871-hagan-calls-for-review-of-nc-voter-id-law#ixzz2cj9LtcNA

Statement on the Monster Elections Law Signed Today by Gov. Pat McCrory dated 8-12-13
Gov. Pat McCrory today signed the monster, 60-part elections bill into law. The radical new law makes the most sweeping changes to North Carolina’s election process in decades. It redefines and restricts who can vote, where, when and how and, at the same time, allows more special-interest, private money to pour into our public elections, often from secret sources.
To call it a law to promote confidence in elections is ridiculous. It is a devious law designed to help certain politicians and wealthy donors, not honest voters. It not only slices a week off early voting and ends pre-registration of teenagers, it raises contribution limits five-fold to judicial candidates, eliminates disclosure of electioneering spending by corporations in the summer months before a fall election, and repeals North Carolina’s pioneering “Stand By Your Ad” law.
The substance and process of this monster law demonstrates a complete disrespect of voters and free and fair elections. Under the cover of an ID requirement, legislative leaders and the governor have adopted a host of radical measures that would likely not have survived under the scrutiny of focused media coverage and real public debate.
Among the controversial measures that will make it harder for North Carolina citizens to register and vote, the new law:

How Voter backlash against voter suppression is changing our politics dated 4-29-13
As the 2012 election approached, Republican governors and legislators in battleground states across the country rushed to enact restrictive Voter ID laws, to eliminate election-day registration and to limit early voting. Those were just some of the initiatives that the National Association for the Advancement of Colored People identified as “an onslaught of restrictive measures across the country designed to stem electoral strength among communities of color.”
Why did so much energy go into the effort?
John Payton, the president and director-counsel of the NAACP’s Legal Defense Fund, explained, “These block the vote efforts are a carefully targeted response to the remarkable growth of the minority electorate, and threaten to disproportionally diminish the voting strength of African-Americans and Latinos.”
Civil rights groups pushed back, working with the League of Women Voters, Common Cause and other organizations to mount legal and legislative challenges. But the most dramatic pushback…….
Read more: http://www.thenation.com/blog/174095/how-voter-backlash-against-voter-suppression-changing-our-politics 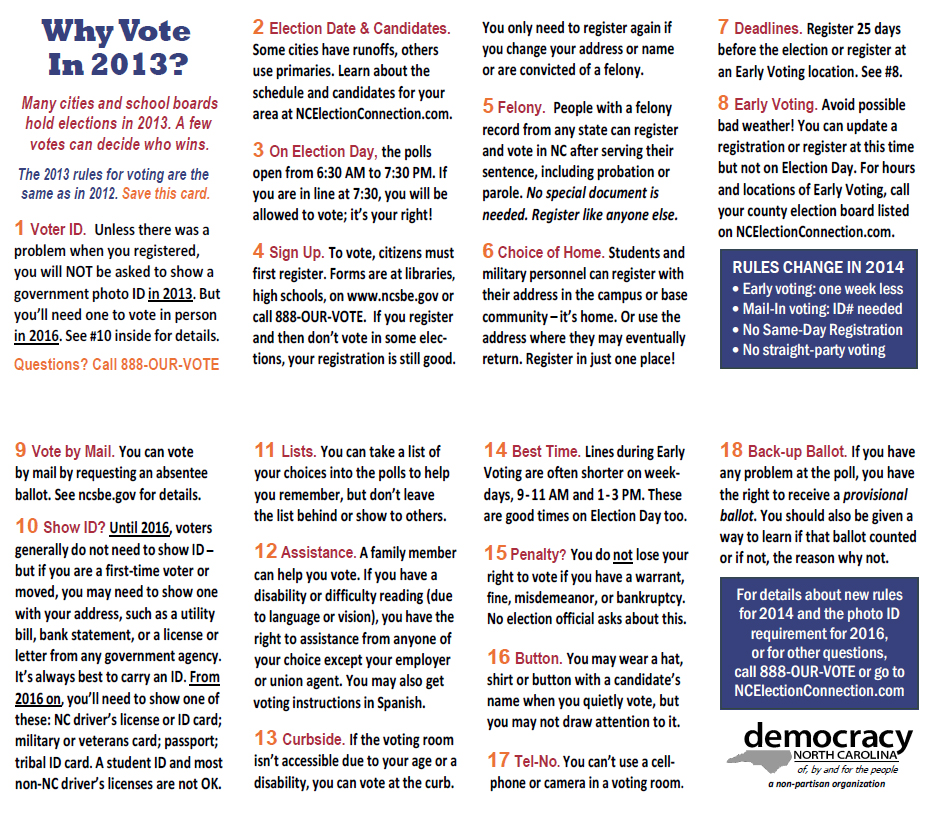